A Pelican in Peril

April 21, 2018
April 21, 2018 -- A sick pelican sat in the middle of the road, just ahead of me, on Castaways Lane.  In the early morning in late April, these streets are quiet.  Maybe I was the first person to see the sick pelican, as I nearly completed my hour-long walk.  I hoped he wasn't sick; perhaps he'd just consumed a large fish and was temporarily impaired.  So I walked the short distance of Tropical Way and back, hoping to find that the pelican had flown away.

No, the big bird was still there, stubbornly sitting smack in the middle of the blacktop.  Something was wrong with him; my guess was that red tide poisoning was his problem. 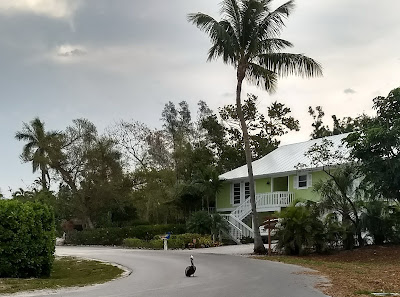 I've taken small birds to CROW (Care and Rehabilitation of Wildlife -- a wildlife hospital on Sanibel Island) in the past.  But I'm not trained in how to handle big birds.

So I called CROW.  Thank heavens for mobile phones!  I wanted to call my neighbor Jim, whom I know does rescue big birds regularly.  But I didn't have his number.  When the young woman at CROW answered the phone, I described the situation to her and suggested that she contact Jim, because he lives only a few blocks from where I stood with the pelican.  She had all of Jim's contact information, so she promised to call him ASAP.  All I had to do was wait, and prevent any cars or trucks from hitting the pelican.

A pool technician drove by, but turned into Roosevelt Place, just before the spot where the pelican had plopped down, like a great rooted turnip.  A neighbor in a pickup truck turned onto Tropical Way, but stopped when saw the pelican.  The neighbor asked me what was happening.  I told him I'd called CROW, and he thanked me.

The pelican and I waited for help to arrive.

A young woman named Sam drove up in an SUV, with her little fluffball of a dog (named Buttons, I think).  Sam stopped on her way toward Harbour Lane.  She nearly drove into a ditch to avoid the pelican.  She also thanked me for staying with the bird and calling CROW.

The pelican stood up and walked a few feet to get farther away from the SUV.  Then he collapsed again, as if he legs were just too weak to support his weight.  Buttons barked at him.  Sam closed Buttons' window.  Bad Buttons!

The pelican and I waited a little longer for help to arrive.

I then realized that I had Jim's daughter-in-law's phone number, so I called her to see if CROW had been able to reach Jim.  They had, she said.  Jim would arrive soon.

The pelican and I waited a little more.

Jim arrived in his truck.  In the truck bed he had a large, long-handled net, two boxes with breathing holes, a recycling bin, a towel, and some very cool heavy buckskin gloves that reached to his elbows.

Now the pelican, who had seemed like he was waiting for help to arrive, was trying to avoid capture.  He rose to his feet and walked like a drunk; he could not fly.  Jim and I walked around him, and finally Jim was able to back the pelican up to a nearby garage door.  At last he had the pelican in the net, and I tossed the towel to him so that the pelican's head would be covered.  That calmed the pelican a little, but that bird still struggled in an attempt to get away. 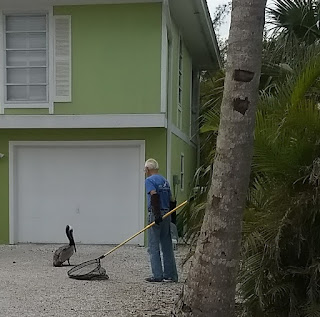 Normally a bird like that is very strong, Jim said.  But not this bird.  I brought one of the boxes from the truck and soon Jim had that pelican in the box, in the truck bed, with a strap holding the box closed.  Jim and the big bird were then on their way to CROW.

A half hour later, as I sat down at this computer, Jim left a phone message for me, saying that the pelican would probably be okay.  Red tide was the most likely culprit.  Fortunately this bird received help; most do not.  I found a dead cormorant in my back yard early one morning, a few years ago.  Red tide killed that poor bird.

Red tide occurs naturally.  However, more frequent and prolonged red tide blooms are the result of massive releases of nutrient-laden polluted water from Lake Okeechobee into the rivers that feed our estuaries.  The source of the worst of that pollution in the lake is cattle ranches and dairy farms north of the lake.

Think about it.  The health of pelicans and other wildlife in the coastal estuaries depends on the practice of cattle ranchers and dairy farmers many miles away, south of Orlando and north of Lake Okeechobee.
Barbara Joy Cooley Castaways Lane CROW Lake Okeechobee pelican Sanibel