On Orchids: Musings by a non-expert

My husband, Tom, started buying orchids many years ago, mostly from the garden center at the home improvement supply store.  He would bring these green friends home, and we would enjoy their company for a while.  But neither one of us would do much to care for them.  When we left for summer travels, we put the orchids out in the trees and wished them luck.  Almost all of them died.

Then we moved to a different house, in a different neighborhood.  I discovered that the pool cage at the new place is ideal for orchids.  This discovery was accidental, since I am not an expert in orchids. 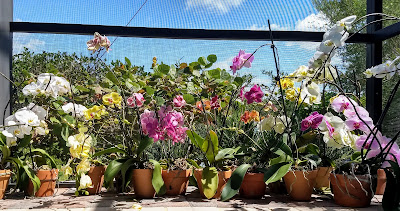 Although they look good at first, the orchids from the home improvement store are poorly potted.  In the pool cage, the pots collected rainwater because they had no drain holes!  The orchids were drowning after every rain.  Inside the drainless pots, the orchids were crammed into cheap plastic pots that did have drain holes but were ugly and surely uncomfortable for the orchid roots, which yearned to be free.

I asked Tom to buy clay pots with drains and orchid potting mix on a few of his many shopping adventures.  Thank goodness he loves to shop, because I do not.

I began to re-pot and care for the orchids.  But I am not an expert in orchids.

The orchids thrived in the pool cage, in their new, simple, and comfy pots.  They survived even when we went away for summer travels. 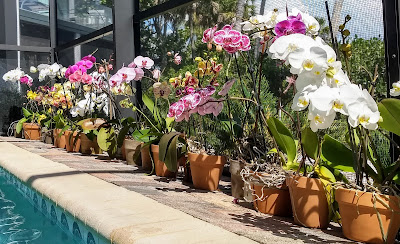 Slowly, I realized that the success with orchids was not due to just the pool cage environment.  The orchids responded to being touched, tended, re-potted, trimmed of dead parts, and even being talked to.  A lady once saw Tom holding an orchid in the garden department and she said to him, "You know, you have to talk dirty to them to get them to bloom."

She was joking, but by then I knew that talking to the orchids about anything -- even just a few words here or there -- produced a positive result.

But I am not an expert on orchids. 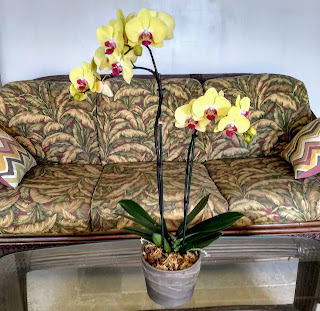 One fine summer day, I watched an expert on orchids give an orchid care demonstration at the greenhouses in the Luxembourg Gardens in Paris.  In clear and instructive French, he insisted that it was necessary to trim the orchid roots in a certain way when re-potting them.  He was very fussy about the form and appearance of the orchids, and he did not want unsightly roots to be popping out and going every which way.

But I am not an expert on orchids, and I like the roots to go wild.  I love to see what they want to do.  I tell them, "Go for it; I'm not stopping you!"  I'm so American.

Some roots wrap themselves in a spiral around the outside of the clay pot, clinging to the pot's surface.  Some roots are explorers that venture out along the surface of the pavers in the pool cage.  Some point wildly into the air, as if they want to fly up out of their pots.  The roots, when allowed to wander, turn a glossy silvery green, and they look well-nourished.  Why hide these crazy guys?

But I am not an expert in orchids.  The orchids of which I speak are phalaenopsis.  We do have some vandas out in the trees in the garden, but the phalaenopsis like being in the pool cage.  They like to be close to each other.  (I think vandas may be loners.) When the phalaenopsis all begin to bloom at once, in February, I move most of them into a clustered row along the far side of the pool cage.  Then they are as happy and colorful as they can be.  I like to say that they are rioting by the pool. 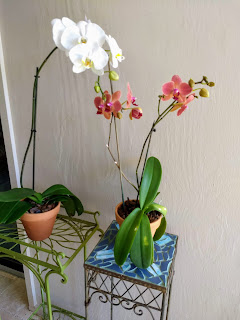 Later, in May or June, when the sun becomes hotter, the blooms begin to die off and the leaves look a bit burned, I move them back into a space that I call the Infirmary -- a shadier, narrow section of the pool cage.  There they recover and survive our summer travels.

But they do not die as they used to do in our old place.  And Tom keeps buying orchids.  Now I probably have too many because there is almost no attrition.  When someone occupies our neighbor's cottage across the street, we gladly loan them an orchid to enjoy during their stay.

I am not an expert on orchids, but in the fall I start to tend to them, one by one, again, giving each what it seems to need.  Some need to be re-potted.  Some need a little more potting mix.  A few need to be soaked in water and then allowed to drain.  Many need to have dead stems or leaves removed.  They all want to be touched.  They like to hear words spoken.

Now in these days of COVID19-related self-isolation, the orchids, as well as Tom, are my faithful and joyful companions.
Barbara Joy Cooley Orchids phalaenopsis vandas

By and large, what fuels our local government, the City of Sanibel, is income from property tax.  Where does most of this revenue come from?  Residential or commercial property? According to the Lee County Property Appraiser’s 2020 Preliminary Tax Roll Totals for Sanibel , the island has about $4.87 billion in taxable residential property out of a total of $5.36 billion in taxable real estate.   By and large, it is the residential property owners, not commercial property owners, who fund the City. In addition to property tax income, the City of Sanibel has some other revenue streams, such as charges for services like planning department permits and solid waste tipping fees.   Much of these are services for residential property dwellers. By definition, those who vote in Sanibel elections are Sanibel residents. Sanibel residents should rule when it comes to making decisions about how this island is governed and developed.   Do they?   Do elected and appointed official
Read more

My dad’s business was vandalized and looted in the Cincinnati riots of 1967-68, yet what concerned him was not his losses, but the injustices and racism that sparked the riots.  He empathized with the people who were suffering so much.  I don’t know if he had heard the Rev. Dr. Martin Luther King, Jr., say that the riot is the language of the unheard, [1] but my dad certainly understood that truth.  I was just an adolescent at the time, but my dad’s words and sentiment about the people who were protesting, and his valuing these people’s yearning for basic human rights and fairness made an impression on me.  I will never forget it. My dad, Winfield Wayne "Whit" White, 1923-2011 So after I listened to the audio stream of the Sanibel City Council meeting on June 2, I had to write these words in Facebook: “It troubles me that the discussion at the beginning of today's Sanibel city council meeting seemed to focus on the council members' concerns about th
Read more

Vaccinations are beginning in Lee County

December 21, 2020
Good news!  Lee Health officials report that today (Monday, December 21) is the day they will be receiving the first shipment of Pfizer’s COVID-19 Vaccine.  “We will begin vaccinating employees as soon as possible,” writes the Lee Health Facebook page manager. Because this first supply is limited, the Lee Health system will start with vaccinating employees with the highest risk of exposure.   That includes those who work in the emergency department, intensive care, COVID-19 units, respiratory therapy, and the COVID-19 test collection sites. These Lee Health employees will go to one of two locations, Gulf Coast Medical Center or Cape Coral Hospital, to receive the vaccine.   Although vaccinations are just starting in Lee County, over 32,700 vaccines have been administered in the state of Florida as of today, according to the Johns Hopkins Coronavirus Resource Center. In a December 15 update sent to hospital board members, Lee Health CEO Dr. Larry Antonucci wrote, “I assure you tha
Read more