What to Read Now: The Gulf


One day, before The Isolation, I was wandering through the MacIntosh Books & Paper shop, and I noticed an attractive, large tome written by Jack E. Davis, The Gulf:  The Making of an American Sea.  MacIntosh owner Rebecca Binkowski had displayed the book prominently on a wall, so it was easy to notice.  I opened the book to a random spot and began to read.  The writing was beautiful!  I tested a few other random pages, and declared out loud, “This is a great book!”  Rebecca responded by telling me that it had won a Pulitzer Prize in 2018, and that the author had made a few appearances on Sanibel in recent years. 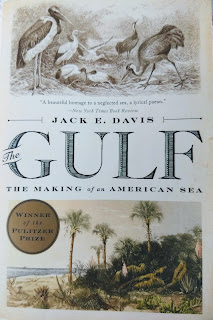 I don’t buy books often because the Cooley household already is home to thousands of books.  But I knew this one deserved a place of honor on my shelves that store books about Florida – after I read it, that is.  As I read it, I kept telling my husband Tom about it.  By the time I was finished, he said he just had to read it, too.  Both of us took our time with the 600-page tome; we savored the writing and the tales.  (Tip:  Tom had to buy the E-book version because the type in our printed copy is a bit small.)

Tom writes textbooks about writing; his publisher is W. W. Norton & Company in New York.  The publisher of The Gulf is Liveright, which is owned by W. W. Norton & Co.  In The Gulf’s “Acknowledgments” section, I noticed the name Rebecca Homiski – one of Tom’s editors.  Of course, I had to send her a Facebook message to say how much we appreciate The Gulf.  Small world.

Jack, who is a professor of history at the University of Florida, begins The Gulf at the beginning; the introduction, called “Birth,” artfully describes the formation of the Gulf of Mexico 150,000,000 years ago.  The introduction also contains an illuminating comparison and contrast of the Gulf and the Mediterranean Sea.

The rest of the book is divided into four sections, each with four to six chapters.  Each chapter is a work in and of itself, and each can stand alone as an essay.

Part One describes the Gulf’s estuaries and the native people living there when the colonizing Europeans arrived.  Part Two takes us into the nineteenth century’s establishment of the fishing industry and the killing of massive numbers of birds – just for their fashionable plumes.  Part Three tells us all about oil, beaches, barrier islands, wind and water.

Finally, Part Four details the growth and development that changed the Gulf and its estuaries forever.  I found myself thinking that all Lee County commissioners should have to read The Gulf.

Oh, everyone who lives near the Gulf should read it.  Now we all have the time to do just that.  Read this book, and the hours of isolation will become treasured intervals when you can saturate your mind with well-written information about your surroundings.  How to buy the book during The Isolation?  Just click here and order it to be delivered from MacIntosh Books + Paper.

I begin my morning walk by just ambling down the lane on the hushed and heavily wooded Porpoise Point, heading south along the aptly named Coconut Drive.   On  breezy days like this, I avoid walking directly beneath the taller, fruit-laden coconut trees.    One day last week, a cannonball-size coconut fell to the pavement right in front of my car as I drove home on Coconut Drive.   The impact was so great that a gush of coconut water shot up from the cracked husk.   I felt blessed that I was no longer driving a Miata, but a CX-3 instead. As I began my walk this morning, I thought about which route to take.   On a windy day, I might not opt to walk on the beach because I do not wish to be sandblasted. Being sandblasted hurts.   But this morning was simply breezy in a blustery way.   When I could see Sunset Bay as I passed the cute, old beach cottages across from Castaways Lane, I could see the exposed sandbar.   Hmmm. Tide is low, I thought.   In spite of the breeziness, I dec
Read more