During the pandemic, I cook all of our meals at home.  I try to keep as much variety in the fare as possible; I’m always trying something new, or reaching back to re-discover traditional southern foods that we love.  I cook French, Italian, other European, North African, Thai, Indian, and of course, southern American soul food. I just put away the deep fryer for a while, in the interest of cardiovascular health, after having made some fried chicken and red horse bread this week.

The earliest recorded use of the term “hush puppy” dates to 1899[1].   But those puppies were inspired by red horse bread, which dates back to pre-Civil War times in the Carolinas.  Some even trace the roots back to creative cooking by 18th Century nuns in Louisiana.

My husband’s father, whose name was also Tom Cooley, made red horse bread, which he called red hoss bread, and served it with fish.  My Tom has fond memories of it.  Red horse bread is named for a type of bream that once was common in the Carolinas, in the area where the Cooleys lived, the Carolina Piedmont.  Tom Sr. liked to fish, and he liked to cook in a most southern fashion.  I have his red horse/hoss bread recipe, and I learned to make it the way Tom Jr. remembers it.  We can only have it occasionally, because it is fried food, after all.

Some people say that what distinguishes red horse bread from hush puppies is the inclusion of diced red bell pepper.  But the Cooley version has no bell pepper; it does include minced onion.  What makes it red, in Tom Sr.’s version, is ketchup.  I use concentrated Italian tomato paste instead (less sugar and salt).

The South Carolina Game and Fish recipe for red horse bread calls for white cornmeal (and red hot sauce!).  I made it with the white cornmeal once, but last night I used yellow cornmeal, with superior results.  Tom Sr. didn’t specify which type of cornmeal, but Tom Jr. tells me it must have been yellow because he doesn’t think he knew that white cornmeal existed until he moved up north for graduate school.

Everyone seems to agree that buttermilk is essential to the recipe.  I don’t approve of buttermilk substitutes; buttermilk keeps for a long time in the fridge, so there is no need to forgo the real thing if you are any kind of southern cook at all, in my opinion.

Salt and pepper to taste

Pre-heat peanut oil in deep fryer for at least 15 minutes.

Mix the cornmeal, flour, and baking powder together in a large bowl.  Mix the egg and tomato paste into the buttermilk in a medium bowl.  Stir the onions into the cornmeal/flour mix.  Then pour the buttermilk mixture, a little at a time, into the cornmeal and mix until you get a firm batter (not soupy).  Pack it down on top and let it set for a minimum of 30 minutes (or up to two hours in the refrigerator).  If you put it in the refrigerator, be sure to get it out and back to room temperature before frying.

When it is time to drop spoonfuls of the batter into the deep fryer, here’s a tip:  Dip the spoon into a glass of hot water, then dip out the batter and drop it into the hot oil.  Rinse the spoon in the hot water and repeat.  (Dry the spoon to prevent oil splatter, and use a soup spoon, not a teaspoon.)

When the dumplings float and turn brown, they should be done.  Makes about 18 dumplings.  Enjoy! 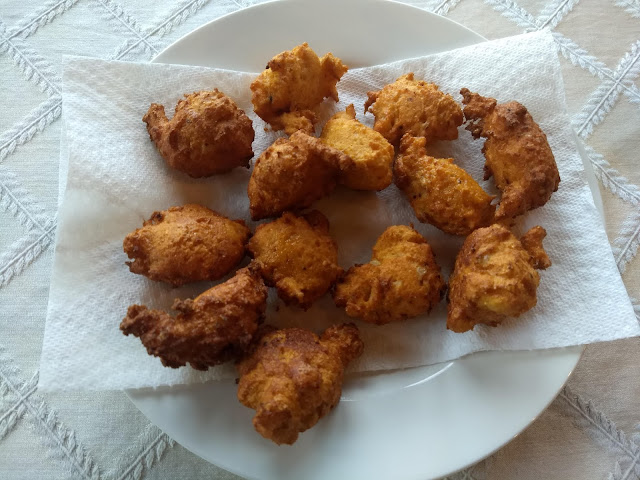 Red horse bread right out of the deep fryer.