December 18, 2014
December 18, 2014 – The busy-ness continues as we surge toward Christmas.  Tom has gigs to play as the various bands are booked for holiday events.  He plays every night this weekend!
Yesterday late afternoon was another Mardi Gras fundraiser planning committee meeting for the below-market-rate housing program on Sanibel.  We actually had fun at the meeting, posing for goofy party-planning photos.  The full committee showed up, having been forewarned that the next meeting, after Christmas, will be only four weeks before the event.  I delighted in watching the few fellow Zontians at the table deal with one difficulty in the committee.  I had to do that at an earlier meeting, with the same difficulty, and now the others were taking up the task, with zeal.  It is nice not to have to do the heavy lifting all the time.  I love being surrounded by other leaders. 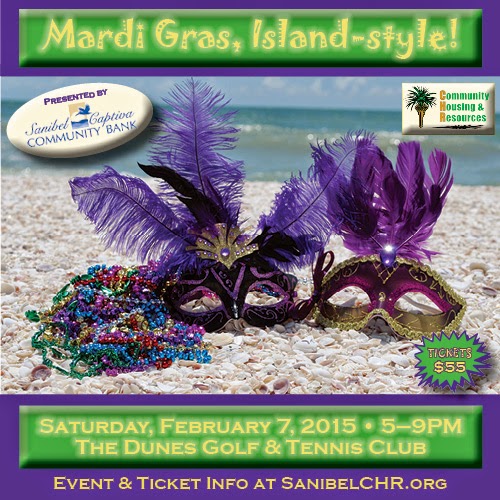 One of my newer Zonta friends who was there, Joyce, is also joining the Committee of the Islands board, and so she saw me in action at the COTI meeting last week.  What a difference – I was so active in the COTI meeting last week, and fairly quiet at the Mardi Gras meeting.  For her, it was the reverse.  She’s a patent attorney and a wellness consultant – an unusual combination!  With her red hair, bone structure, and pale skin, she looks like the faces in a few of the portraits of some of my ancestors that I’ve been researching lately.
Another one of these Zonta friends who were at the Mardi Gras meeting is Sue, who speaks the Queen’s English – literally.  She has the most exquisite southern English accent.  She said when she was younger, she heard herself on a voice recording for the first time, and was appalled.  “I sounded just like the Queen!” she said, aghast.
And then the third Zonta friend at this meeting was Kathleen, who is a retired professor of English.  She’s a Medievalist, to be precise, and she received her Ph.D. from the same school where Tom received his:  Indiana University at Bloomington.
All three of these women have strong leadership qualities.  And there is something about each one of them that brings to mind the people I’ve been learning about as I’ve been doing this genealogical work, tracing family roots back through time, to England, to France, to the Medieval era, all the way back to Charlemagne.
At the Zonta holiday party on Monday evening at the Captiva Yacht Club, Kathleen was seated at our table.  I pointed out the IU connection to her and to Tom, and the two of them seemed to be delighted at all the things they had in common.  Upon learning that she was a Medievalist, I asked her to say something in Old English.  She immediately rattled off a fluent sentence and I applauded.
Now our friends from Germany, Arnold and Mareen, have arrived for a few weeks’ stay in their Sanibel home.  I can’t wait to tell them that one of my 31st great grandfathers was Henry the Fowler, King of Germany from 919 to 936.  Yes, that certainly was a long time ago.
We’ll see them on Sunday, when I’ll break the news about our “kinship.”  It isn’t all that unique.  Each person could theoretically have up to 8,589,934,592 thirty-first great grandfathers, you see.  But because of repetition of ancestors (something found generally beyond ten generations back), people today have far fewer than 8,589,934,592 thirty-first great grandfathers.  Please don’t ask me how many fewer; I have no idea, and I’m sure there’s a wide variation in that number, from one individual to the next.  Basically, the same ancestors keep popping up again and again in each person’s ancestry.
In doing this genealogical work, I simply got lucky.  I was able to find an ancestor, Sir Ralph Sadlier, who worked for Henry VIII of England.  He was a highly literate and well-documented person, so from there I was able to use history books and encyclopedia articles to do genealogical work.  That’s what enabled me to go so far back in this one small portion of our family’s genealogy.
Sir Ralph Sadlier’s ancestry wasn’t all that remarkable.  But his oldest son, Thomas, had a second wife, Gertrude Markham, who did have remarkable roots.  My dad is a descendant of Thomas and Gertrude, and that might explain how his cousin Gert got her name.
At Happy Hour on Friday, Darla asked me about the genealogy work because she and I share the same maiden name, White.  I explained that it wasn’t the White family roots that I was able to trace back so far; rather, it was my dad’s paternal grandmother, Mary Ann Tolson, whose lineage set me off on this long trek.
I’ve been reading Wikipedia articles about the many illustrious ancestors; noting that some of them did appallingly horrible things.  Of all the ancestors, the one whom I admire the most is a young man who ventured away from his native England, and came to America, in about 1680.  His name was Joseph Thomas Sudler.  Joseph Thomas’ mother had died when he was only 10 years old, and he was raised then by a stepfather.  As soon as he was old enough, he set off for the brave new world of Maryland Colony, where he met and married Cecily Evans, a young widow who had also immigrated from England years earlier.


Joseph Thomas and Cecily had seven children, but he died at the young age of 41.  Life in Maryland Colony must have been difficult in the 1600s.  England may have been more comfortable.  But I’m glad Joseph Thomas Sudler came to America.
Barbara Joy Cooley Henry the Fowler Sadler Sadlier Sanibel Mardi Gras Sudler Tolson