The information posted online included quotes from the book, all by people I knew when I lived there.  Tom and I knew Emily Foster, too.  Despite the stress of football weekends, I have many fond memories of the years in the University District.  Reading the quotes made me so nostalgic that I ordered the book online.  Such a book about a place in Ohio is not likely to be found in any local bookstore in southwest Florida.

The book arrived two days ago; this morning I had some time to peruse its pages.  The second paragraph of the acknowledgements contained a shocker:  my friend Linda Ridihalgh died in 2011.  I had no idea.

She was the kindest person I knew in the University District.  We spoke on the phone in 2002, I believe, when she was putting the final touches on a book called Escape from Someday Isle.  It is a “best of” collection of essays from Living Aboard magazine – a publication that Linda edited for some years.

Linda had called me to ask if I knew how to get in touch with Sanibel author Randy Wayne White.  Linda thought it would be nifty to have a quote by Randy about Escape from Someday Isle – something to be printed on the back cover of the paperback, in order to promote its sales.

I emailed Randy; he replied that indeed he was willing to provide a blurb for the book’s cover.  He and Linda communicated, and he told her he’d do this as soon as he was back from Colombia.  Linda called me again to thank me, and said that Randy had promised to send her the blurb after he returned from South Carolina.  I laughed, and said, no, I think he means Colombia, in South America, not Columbia, South Carolina.  We made a small wager about who was right.  We giggled together on the phone again when she called to tell me I’d won the bet.

I don’t know what the full quote is, but a part of it appears on Amazon.com’s page about the publication:
...a practical guide for those who dream about selling the house, buying a boat, and heading for the horizon. -- Randy Wayne White, author, Twelve Mile Limit

A practical guide for dreamers – I like that idea!  Those words sound like Linda herself; she had good ideas about solutions for University District problems, and yet she maintained a cheerful and romantic vision about the area’s wonders and charms. 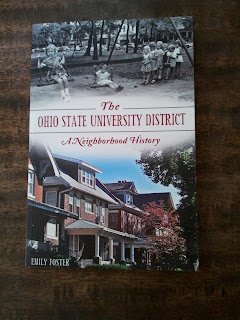 Tom and I have lost touch with many people we knew in Columbus.  I should have noticed that I had not seen any Facebook posts or emails by Linda in so long.  I’m surprised I did not see any posts or announcements about her passing.  I hope she did not suffer from a long illness.

Today I ordered Linda’s book.  Meanwhile, Emily Foster’s collection of tales and reminisces about the University District will keep me steeped in nostalgia.

Here’s one of Linda’s University District memories, as published in Emily’s book: