February 12, 2020
In these days of concern about climate change, we often hear about the importance of forests for storing carbon.  Worldwide, mangroves account for storage of more carbon than almost any other kind of forest on earth.  I wrote about mangroves in this blog four years ago.  Since then, a study published in 2018 has shown that the earth’s mangrove forest soils hold 6.4 billion metric tons of carbon in 2000 – far more than previously estimated.[1]

Besides sequestering carbon, these mangroves around us are stabilizing our shorelines. Their root systems slow the flow of the water, causing sediments and nutrients to settle and form a foundation for marine life.

Mangroves are important to fish.  The Florida Museum affiliated with the University of Florida tells us that “an estimated 75% of the game fish and 90% of the commercial species in south Florida are dependent upon the mangrove system during at least part of their life cycles.”

So now I’m a little confused about why so many waterfront homeowners refuse to let mangroves grow on the waters’ edge of their properties.  Trimming of mangroves is allowed, within limits, so the water views are not eliminated by allowing mangroves to grow.  But the mangrove-less homeowners are missing out on a great wildlife show.

The show is so good that my husband and I don’t watch TV anymore.  We just look at the mangroves and the bayou.  Really.

Besides the plethora of birds that like to hang out in the mangroves, amusing little mangrove crabs race up and down the branches and roots.  In the water around the roots, small fish seek shelter from bigger fish.  Dolphins routinely rush after fish who flee to the shelter of the mangrove roots as fast as they can.  This excitement we see nearly every day! 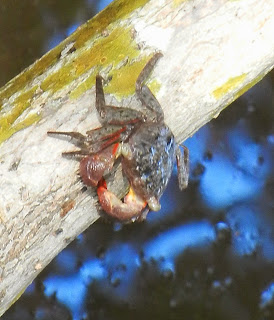 One day when I was asked to take a sample from the bayou, the water near our mangroves looked a little milky.  Later the scientist at the marine lab told me that there were many oyster larvae in that water sample.  More life --  in abundance!

The mangroves not only give us protection, but they also give us more land.  The mangroves grow over and beyond the old wooden seawall on our property – a seawall we have abandoned to nature.  The mangroves have built up land in front of the seawall; a little sediment goes a long way after a while.

Our home without the mangroves would be like a picture without a frame:  okay, but much better with than without.  The mangroves give context, beauty, and function.  Mangroves provide privacy, excitement, and defense.  Grow mangroves!