I begin my morning walk by just ambling down the lane on the hushed and heavily wooded Porpoise Point, heading south along the aptly named Coconut Drive.  On breezy days like this, I avoid walking directly beneath the taller, fruit-laden coconut trees.

One day last week, a cannonball-size coconut fell to the pavement right in front of my car as I drove home on Coconut Drive.  The impact was so great that a gush of coconut water shot up from the cracked husk.  I felt blessed that I was no longer driving a Miata, but a CX-3 instead.

As I began my walk this morning, I thought about which route to take.  On a windy day, I might not opt to walk on the beach because I do not wish to be sandblasted. Being sandblasted hurts.  But this morning was simply breezy in a blustery way.  When I could see Sunset Bay as I passed the cute, old beach cottages across from Castaways Lane, I could see the exposed sandbar.  Hmmm. Tide is low, I thought.  In spite of the breeziness, I decided to walk the beach.

I could hear the waves crashing as I approached the Gulf.  I forged ahead, leaving the peaceful streets of Santiva behind.

At the southern end of the Santiva guardrail, I ducked into the sea grape canopy of the short beach path.  Then my feet were pounding into the soft sand.  The stiff breeze and crashing waves roared in my ears.  The air was thinly veiled with a salt mist, giving a silvery sheen to the view.  No wonder this is called Silver Key, I thought.

I walked into the wind, southeast along the shore.  A slightly rogue wave struck my feet when I was trapped by an escarpment.  And so I discovered that it is possible to walk in wet Skechers.

I focused on the wet and dry sand.  Not too many shells today, I thought.  But that will change, once the storm passes.

The change is constant.  The beach is never the same.  Each time I am on the beach, something is different from before.  Every day is unique out on the beach.

At 4AM, I had received this email from emergencyemail.org:


Dangerous.  That word will surely attract some surfers today.  I expect to see a few out there, in their black wetsuits.

A few other people were on the beach at that early enough hour of 8AM.  Let’s see, one neighbor from Pine Avenue, a couple walking two collies (on leashes, I’m happy to say), and another couple who were shelling. 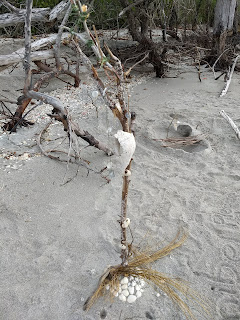 The beach walk was tough until I turned around at Old Blind Pass.  Then the wind was at my back, pushing me toward home again.

After an hour had passed, the wild walk was over.  Now I sit at my desk, looking out over Dinkins Bayou, which appears to be swelling.  Dolphins swim by, as usual.  Coconut fronds flap gently in the blustery breeze.  The sunlight is golden on the tops of my treasured mangroves.  The temperature is a balmy 74 degrees F.  Nearly perfect, with a touch of excitement in the air.

The tide will peak tonight at about 9PM.  Then tomorrow morning at 6AM, tide will be quite low.  The storm will have passed.  It will be time to walk on the beach again, because it will have changed again, as always.