On Mother’s Day in 2016, we saw some marvelous things.  There were several of them, these strange little creatures, moving about gracefully and silently in the water beneath and around our dock.  My husband and I had never seen anything quite like them.  We’d only been living on Dinkins Bayou for about a year, and before that we had not lived on salt water.  We had never seen such a weird and beautiful creature that swam like a sting ray, by flapping its “wings,” which are called parapodia.

The next day, I posted photos of the creatures on Facebook and asked my knowledgeable friends, “What is this little sea creature?” 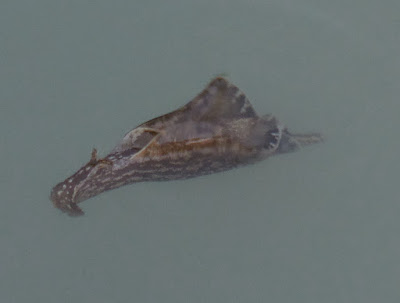 Sea hares are gastropod mollusks; they have a small internal shell.  Off the coast of California, sea hares are black, and they are significantly larger than our Gulf sea hares.

Sea hares eat algae – nothing but algae – as well as toxic blue green algae which is not real algae but rather bacteria known as cyanobacteria.  Eating the blue green algae is a survival mechanism for the sea hares.  They eat so much of it that it keeps predators (mostly crabs and lobsters) at bay.   (They also squirt out red or purple ink to ward off predators.)  Scientists found that a substance called dolestat is in some cyanobacteria.  Sea hares that eat cyanobacteria can concentrate dolestat molecules in their bodies.  That dolestat in sea hares has been used to make a cancer-fighting immunotherapy drug called Adcetris (brentuximab vedotin).

Julianne Steers, a marine biologist at the Ocean Institute in California, is an expert on sea hares.  When asked to identify some of the creature’s unique characteristics, she said, “They are hermaphrodites, meaning they have both male and female reproductive organs . . . . And, they are a valuable laboratory animal. Medical researchers use them in neurobiological studies on learning and memory. These animals have some of the largest neurons in the animal kingdom.”

People often ask if sea hares are edible.  The Florida Go Fishing web site recommends against trying to eat them because of the toxin in the ink that they squirt; that toxin is also in the sea hare’s slimy skin.  Because they are not appetizing and not abundant, Florida Go Fishing also does not recommend using them for bait, either.  And don’t put them in your aquarium, because after they eat all the algae they will starve.  Florida Go Fishing concludes, “Let’s just say, leave the sea hares alone and enjoy their beauty as they pass you buy.”