April 23, 2015
April 23, 2015 – Dick, who is one of our neighbors on Pine Avenue (a neighbor to the land we own that we had planned to build upon), had graciously offered to take us out in his boat so we could see the house we are buying from the back – that is, from the water.  On Tuesday, Tom and I took him up on his generous offer.

We’d just had lunch with my mom at Cip’s.  Back at our house, we donned hats and sunglasses; then the three of us went to Dick’s place on Dinken Bayou. The bayou is a super-slow, no wake zone for boats because manatees like to be there – and so do dolphins.  We didn’t see those creatures on Tuesday, but we saw plenty of interesting houses from the water.

We pulled out into the bayou from the end of the canal that parallels Pine Avenue, then proceeded north, passing the houses of Harbour Lane and Coconut Drive on the bayou side.  The second to the last house on that side of Coconut is the one where we will be living soon.  It is a sort-of Spanishy thing, designed by the architect Bud Lawrence, and built by our friend George Parker (now retired to Mount Dora) in 2001. 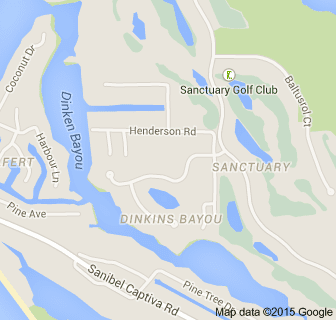 Dick took us on around the tip of this peninsula, called Porpoise Point.  There we could look down the water to see the quaint Castaways cottages and marina.  Dick turned the boat around, and we retraced our route, then went beyond it to see the houses on White Heron and Pine Tree, from the Dinken Bayou side.

After we move, I hope to do this kind of excursion by paddleboard on a regular basis.

Yesterday, I went on an entirely different kind of excursion, with the group of people in the class that I’m taking on the Religious History of Florida.  About 23 of us climbed into a big, air conditioned tour bus and rode to Dunbar, the community just east of downtown Fort Myers.  First, we visited the Black History Museum, which I’ve been wanting to see for some time.  Then we boarded the bus again for two short jaunts to the Mount Olive African Methodist Episcopal church and St. John First Missionary Baptist Church.

I had a hunch that I just might see old friends Nancy and Levon Simms at Mount Olive, and indeed I did.  It was good to catch up with their news – Levon is in the middle of a campaign for Fort Myers City Council.  I’m hoping he will win the election on May 19.

Mount Olive’s minister, Rev. James Givens, spoke to our group about the church and answered our questions.  He’s a dynamic man – it’s no surprise that the church’s active membership has grown tremendously since he’s been there.  This church is so alive that it has FIVE choirs!
At the museum, I’d learned that the Simms’ daughter, La Tanya, is now a Captain in the U.S. Navy.  She was the first African American woman to command a Seabee unit.  Impressive!  She’s also a registered architect in Florida.  The current issue of the local newspaper called The Community Press has an article on the current issue’s front page about Captain Simms.  Several of us picked up copies of the paper at lunch.

The Simms’ are rightly proud of their daughter, and they are also proud of their church.  Nancy was sure to point out that the locally famous Veronica Shoemaker is a member of the Mount Olive church.   Veronica is an amazing woman who was so dedicated to public service that she ran for Fort Myers city council for sixteen years before becoming the first black elected official in that city in 1982.  She then held that seat for 26 years.

After touring the two churches, we returned to the grounds of the Black History museum, where, in a nearby building, we consumed a catered lunch consisting of fried chicken, collard greens, black eyed peas, fried okra, and cornbread, with either peach cobbler or banana bread pudding for dessert.
This was all prepared by Chef Michelle of Chelle’s Special Touch Catering, located on Martin Luther King Boulevard, nearby.  The food was terrific, and had been prepared in a way that is healthier than traditional southern/soul food cooking.  The fried food was not greasy and the seasonings, in particular, were excellent.

Chef Michelle was featured in that day’s food section of the News-Press.  Her story is compelling, built of hard work and passion for good food.

After lunch, we saw a video recently made by the News-Press about the history of racism in Fort Myers.  It was a well-done production, on a somber topic.

One of our guides on this trip was Yvonne Hill, with whom I’m becoming friends although I’ve known about her for a while.  I like her book, Images of America: Sanibel Island.  The other, of course, was John Danner, our pastor and teacher of this course on Florida history.

The bus driver, Jimmy, was an excellent supplemental guide.  As he drove us around Dunbar, he pointed out a number of landmarks, and provided fun anecdotes.  On the way home after the lunch and video, I settled into a quiet seat near the rear of the bus, reading the newspaper and watching the scenery.  I could see so much more from that bus window than I can from my ground-hugging Miata!

Jimmy chose an interesting route home, following Fowler to the south, and then taking Colonial, Boy Scout, Summerlin, and Gladiolus, so that we went through Harlem Heights, another neighborhood that came up several times in conversation throughout the day.