October 10, 2014 -- I am honored when I see snakes like this in our back yard.  This is a southern black racer, and its favorite food is rodent, although it also will eat frogs, toads, lizards, birds, and fellow snakes.  Because I dislike palm rats, I have come to love snakes that prey upon them.

This racer was catching the last few rays of sunlight in our back yard yesterday evening.  Its scientific name is coluber constrictor priapus, but it does not constrict its prey; it swallows the prey alive.

This past April, in my butterfly garden I saw a racer like this in the act of swallowing a black-throated green warbler alive.  I'd prefer this snake would keep to a steady diet of rodents instead of having the variety of the occasional precious songbird.  But I don't mess with nature; I did not attempt to save the bird.

My copy of Florida's Fabulous Reptiles and Amphibians says, "This slender, graceful, and fast-moving snake is often found near human settlements and in cities.  It is probably the snake most frequently seen in Florida, particularly by city dwellers.  This is because it is large and active during the daytime."

This slithery guy is far from the city, but apparently has decided that our property qualifies as a human settlement, and he's doing us the favor of hunting down and swallowing any palm rats that dare to venture here.

Palm rats are also known as roof rats, citrus rats, fruit rats, black rats, and gray rats.  So maybe we should stick with their scientific name, rattus rattus, for clarity.  According to the University of Florida's extension service, this creature is "the worst rodent pest in the state of Florida and most abundant."

Rattus rattus is dangerous, because it can chew through wires, potentially causing fires, and through plastic and lead pipes, potentially causing structural damage.  Florida is not the only place plagued by this pest; its range extends from Virginia to Texas, following along the Gulf Coast, and it also lives along the Pacific coast in Washington state, Oregon, and California. 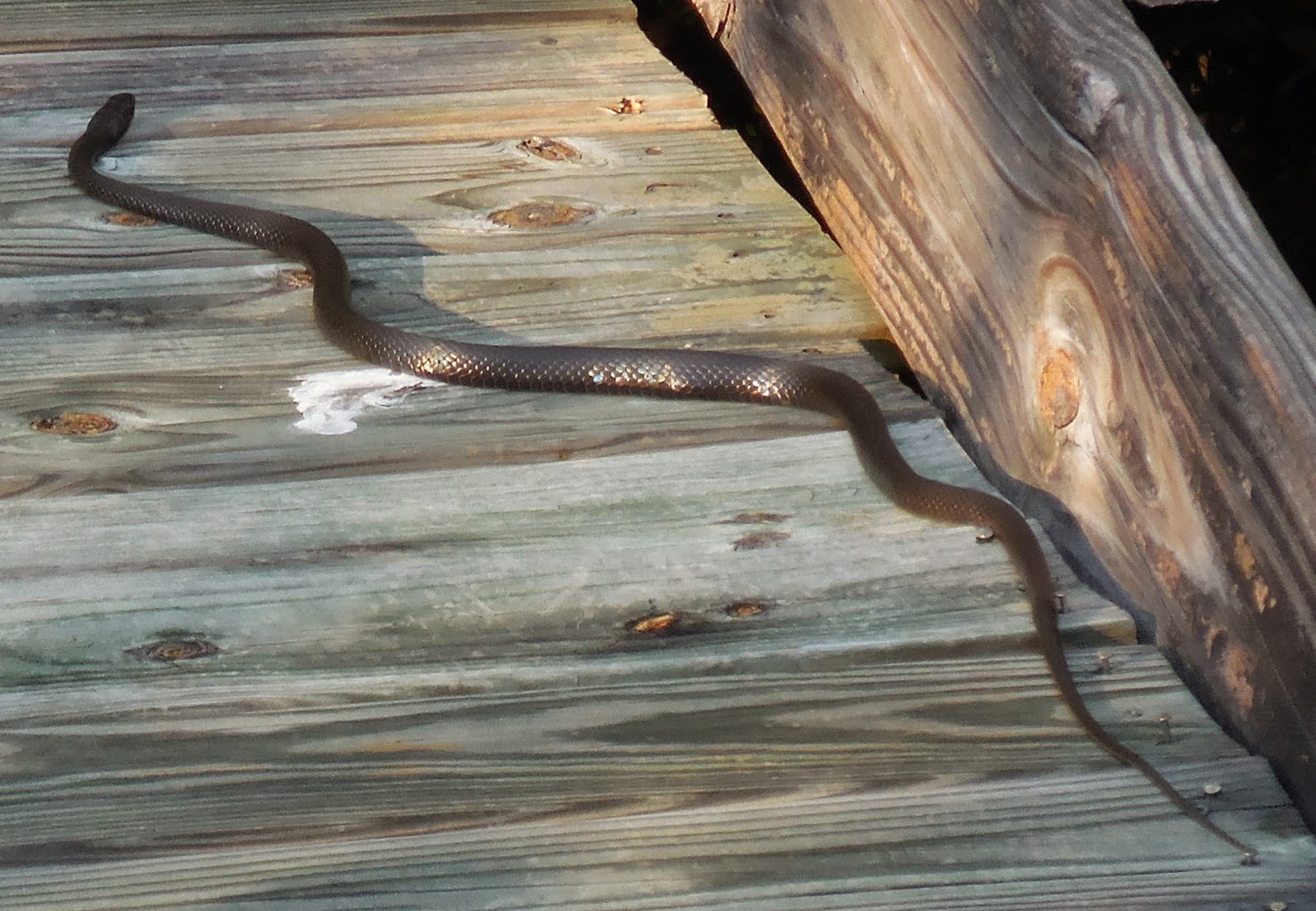 I don't want to have to use poison to get rid of rattus rattus, and I don't want to trap them, either.  For this reason, I adore snakes like the southern black racer.

The black racer is not poisonous, but it will bite. So, let's follow the advice given in the Florida's Fabulous Reptiles and Amphibians book:  do not disturb the black racer, because "it is an important part of nature's pest control system."

When you see a snake like this in your yard, let it be, and say a little prayer of thanks.