Of Ceiling Fans and Washboards, in Another Time

October 12, 2014
October 12, 2014 -- My husband Tom is a travelling man.  He doesn't travel far at all without me, but because of his hobbies and avocations, he leaves this island more often than I do. Yesterday, he had a gig.  The Blue Dirt Dixieland Jazz band, for which Tom is percussionist, played at lunchtime at Fleamasters, an indoor flea market on Martin Luther King Boulevard in Fort Myers.  For this gig, the band was in its “strolling” mode, so Tom played the washboard instead of his drums.
Tom has customized his washboard so that it includes a cowbell, a little cymbal, and other things.  He uses extra-extra-extra large thimbles on his fingers to play this contraption.  He needs more huge thimbles, so if you see any, please let me know.
Later, at home, he said, “You know, I think I’m even better at playing the washboard than the drums.”  Clearly, he had a great time.
When the gig was over, he engaged in another of his favorite past-times:  shopping.  He went to several big box stores to buy a wireless keyboard, orchids, and other things.  At Costco, he bought European cheeses and rainforest-friendly roses for the house (and me). 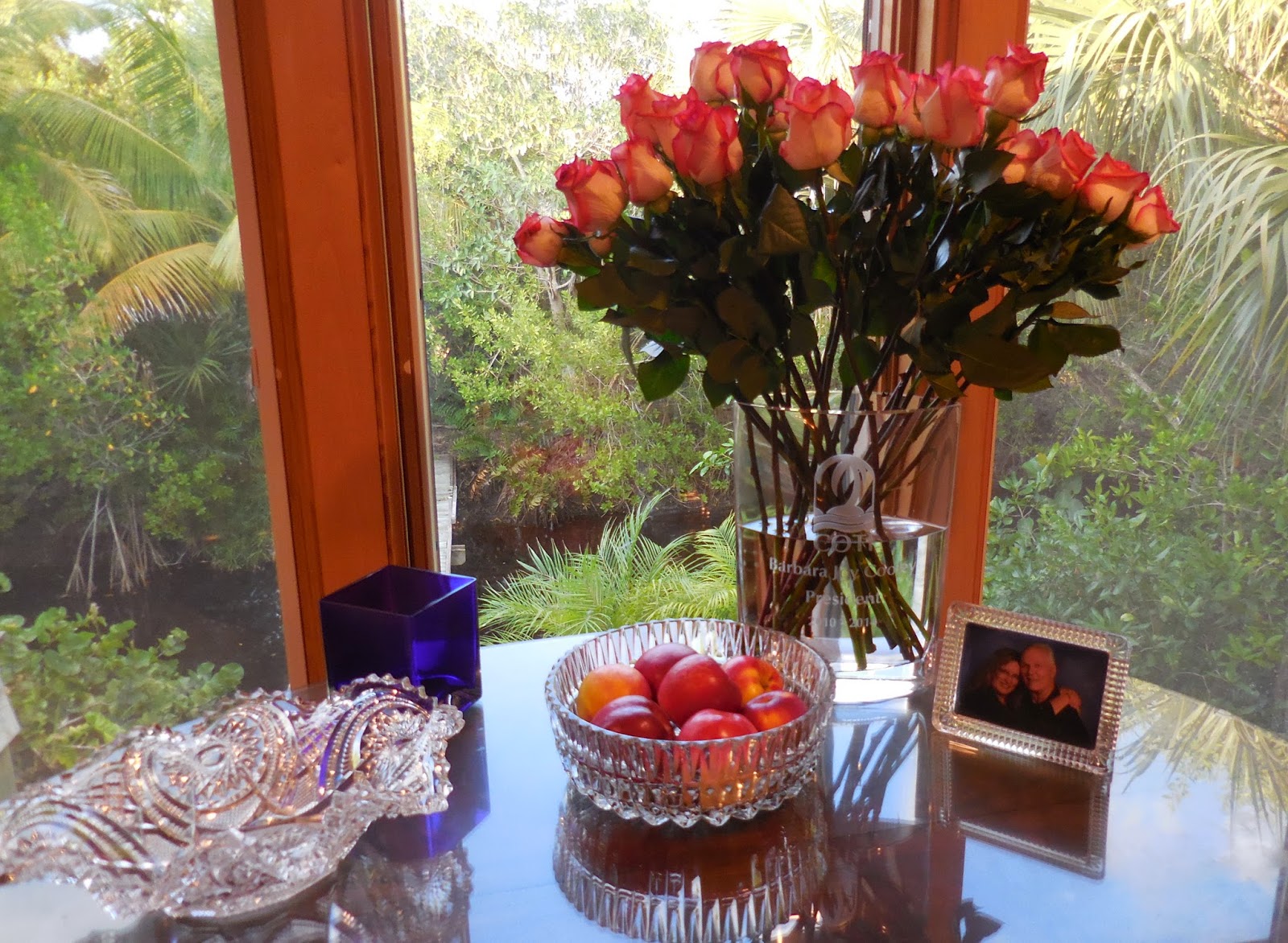 While he was having all this fun, I was doing the beginning of the top-down Fall house-cleaning.  This stage involves the use of a stepladder to do the precarious cleaning of all the high places:  tops of armoires, etageres, cabinets, the high-boy, and best of all, the ceiling fans.
Ceiling fans are essential in south Florida.  On the main level of our house, we have them in every room of any size, including the master bathroom.
According to Wikipedia, ceiling fans are an American thing.  They first appeared in the U.S., at about the time of the Civil War.  At that time, they were operated by a thin stream of water and a turbine.  Several fans would operate on one system.  Some of the first ceiling fans were found in stores.  This makes sense to me; cool shoppers will buy more things, while hot shoppers just want to escape the hot, stuffy store.  One of the reasons I don’t shop much in Paris in the summer is because so many of the shops are uncomfortably warm.
A German-American engineer named Philip Diehl first used a motor from an electric sewing machine (also his innovation) to power a ceiling fan in 1882.  Ceiling fans became popular globally.  The energy crisis of the 1970s gave them even more of a boost. 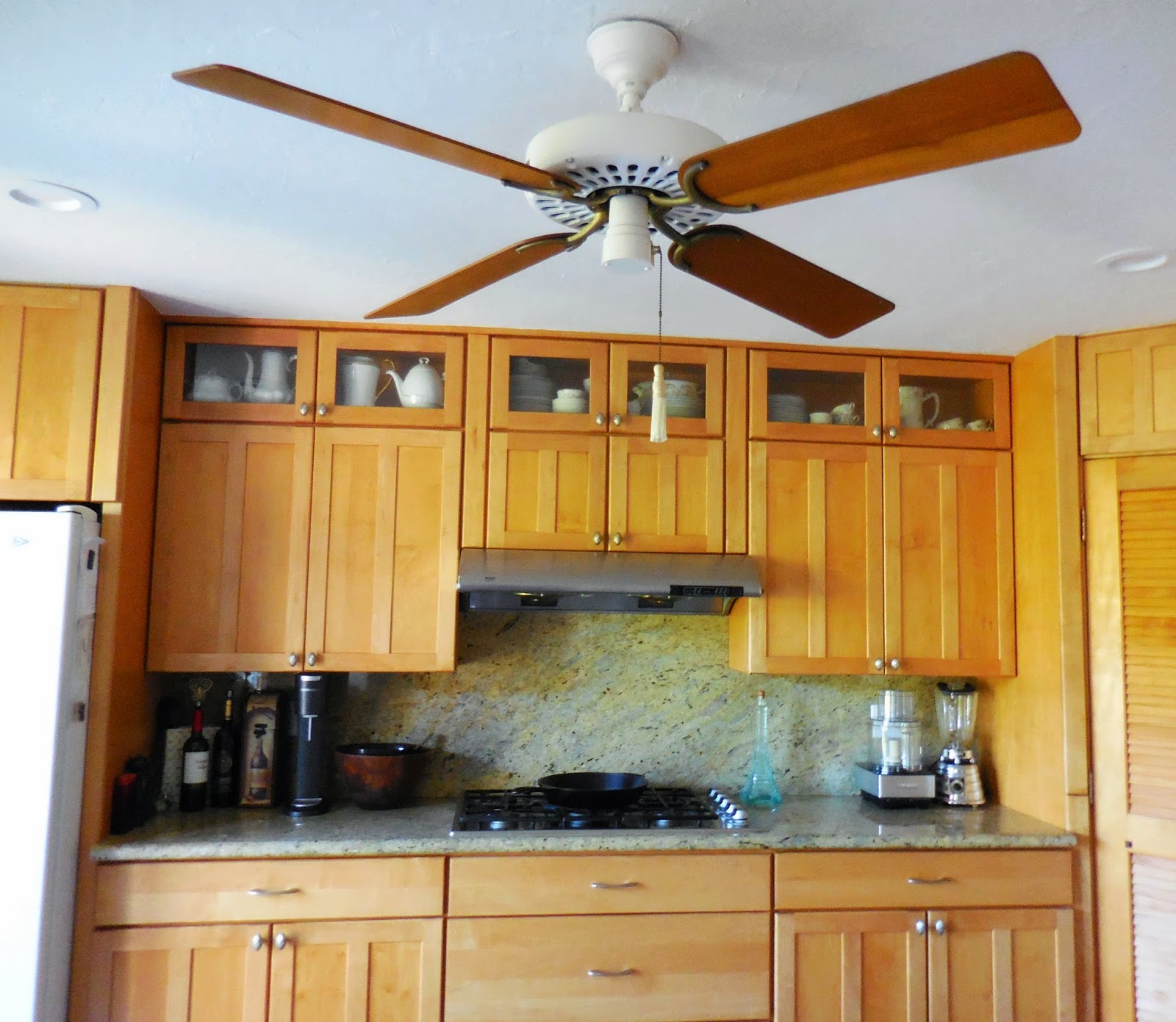 Ceiling fans don’t last forever, so I am amazed that we still have one of the original fans from our home’s 1978 construction.  It is now in the kitchen, where its simple design fits well with the decor. It is the only fan I painted, to change it from ugly brown to white.  I remember consulting an expert to find out what kind of paint to use on a machine like this.  Maybe this extra attention is the reason this fan has survived for so long.  People say a coat of paint can work wonders!
When Tom came home and gleefully unloaded his haul from the Honda van, I happily arranged the roses in a Luc Century vase.  Then it was time to get ready for dinner.
Our friends and neighbors, Inge and Henry, wanted to take us out to belatedly celebrate Henry’s birthday, just as we took them and another couple out last June to celebrate Tom’s birthday.
So the four of us went to the historic Old Captiva House, in the charming Tween Waters Inn on Captiva island.  It was a fine way to catch up with our longtime friends.  We talked about everything from currency values to the two times Henry won Ugly Tie contests.  Henry had a seat on the cotton exchange for many years, so he knows about both money and ties.


And we know how good it is to have good neighbors.

By and large, what fuels our local government, the City of Sanibel, is income from property tax.  Where does most of this revenue come from?  Residential or commercial property?
According to the Lee County Property Appraiser’s 2020 Preliminary Tax Roll Totals for Sanibel, the island has about $4.87 billion in taxable residential property out of a total of $5.36 billion in taxable real estate.By and large, it is the residential property owners, not commercial property owners, who fund the City.
In addition to property tax income, the City of Sanibel has some other revenue streams, such as charges for services like planning department permits and solid waste tipping fees.Much of these are services for residential property dwellers.
By definition, those who vote in Sanibel elections are Sanibel residents.
Sanibel residents should rule when it comes to making decisions about how this island is governed and developed.Do they?Do elected and appointed officials always put the interests of r…
Read more

My dad’s business was vandalized and looted in the Cincinnati riots of 1967-68, yet what concerned him was not his losses, but the injustices and racism that sparked the riots.  He empathized with the people who were suffering so much.  I don’t know if he had heard the Rev. Dr. Martin Luther King, Jr., say that the riot is the language of the unheard,[1] but my dad certainly understood that truth.  I was just an adolescent at the time, but my dad’s words and sentiment about the people who were protesting, and his valuing these people’s yearning for basic human rights and fairness made an impression on me.  I will never forget it.
So after I listened to the audio stream of the Sanibel City Council meeting on June 2, I had to write these words in Facebook:
“It troubles me that the discussion at the beginning of today's Sanibel city council meeting seemed to focus on the council members' concerns about the rioting in cities across the country, and not on the racism and injustices t…
Read more

Can Sanibel Walk the Walk?

After hearing dozens of citizens complaining loudly about the air pollution and noise emitted by gas-powered leaf blowers, the Sanibel City Council reacted by merely reducing the hours that these devices can be used by commercial landscapers and city employees.  Because a few landscapers do not want their workers to wait until 9AM to start working, they have replaced the gas-powered blowers with more environmentally friendly electric ones.

That ordinance was passed by the Council in December, but even as the Council members passed it, they acknowledged that they need to do more to reduce or eliminate the use of these pollution spewing machines.

In January, they shocked the citizens by doing as little as possible: they passed a resolution to "encourage individuals and businesses to voluntarily use environmentally friendly alternatives to gas-powered landscape equipment, including electric and battery equipment, in addition to manual tools."

I thought that this request for vol…
Read more